Starts around the 30 second mark.

Drop everything and watch Killer Mike’s speech in Atlanta tonight. I don’t agree with him on all of his politics, but that doesn’t matter tonight. He’s 100% right about how to handle protesting and how to change the system… and it isn’t burning your city to the ground. https://t.co/VzDNMTM0wH https://twitter.com/TimRunsHisMouth/status/1266556854869602310 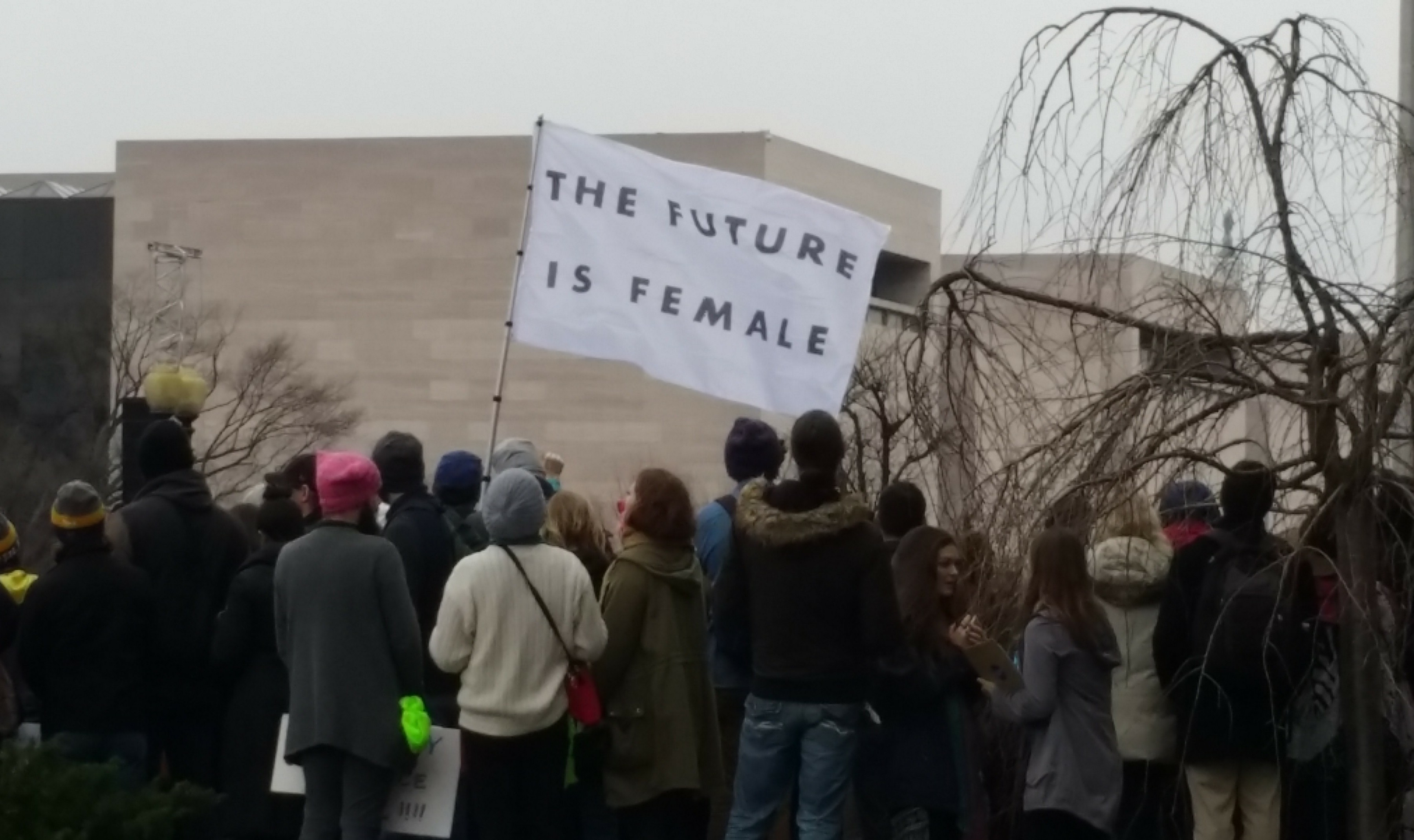 tl;dr: The Women’s March on Washington is a protest march slated for January 21, 2017 in Washington D.C. It will be historic, the first major intersectional march representing the interests of a diverse set of marginalized communities (and their allies) concerned with a whole platform of domestic policy issues. In the current political climate, it has the potential to start some real dialogue between disparate progressive, liberal and radical groups and perhaps even serve as a launching point for a grassroots political movement that will resist the worst excesses of the Trump era and pave the way toward a better politics of the future. If you are able to be a part of it (or similar marches in a city near you), please go. (1,736 words)

The Women’s March on Washington (WMW) is scheduled for January 21, 2017. In a pre-WMW guide published in late-December 2016, The Guardian quoted the organizers:

“The Women’s March on Washington is quick to say it is not an anti-Trump protest. ‘We’re not targeting Trump specifically. It’s much more about being proactive about women’s rights,’ said Cassady Fendlay, spokeswoman for the march…The march is a very broad church, with [Linda] Sarsour [Executive Director of the Arab American Association of New York and a National Co-Chair of WMW] explaining it as a ‘stand on social justice and human rights issues ranging from race, ethnicity, gender, religion, immigration and healthcare’.”

The WMW was concieved of the day after the election of Donald Trump, and it will take place in Washington D.C., the day after the inauguration of President Trump. Clearly, it started as a protest of Trump’s election. But, it has evolved into something else.

Given Trump’s bullying comments and behavior toward women, women are the most motivated to get into the streets to protest, and they are out-front, leading the effort and focusing it on women’s issues. As the idea of a WCW gained traction and organizational efforts consolidated, the organizers were criticized for their lack of diversity, and the concepts of intersectionality of oppression that are central to third-wave feminism seem particularly on point, since the initial leaders were all white women. In response, the WCW leadership recruited women of color, such as Linda Sarsourm mentioned above, to join them and explained the organizational changes in a Facebook post entitled: “Women’s March On Washington: Origins and Inclusion“:

“The reality is that the women who initially started organizing [the WMW] were almost all white. As the movement grew, they sought ways to address this crucial issue…It was, and is, clear that the Women’s March on Washington cannot be a success unless it represents women of all backgrounds…These women [of color] are not tokens; they are dynamic and powerful leaders who have been organizing intersectional mobilizations for their entire careers…The first week was a heavy lift to ensure a solid structure, but the organizers continue to work hard to engage people from diverse communities. Now voices including Asian and Pacific Islanders, Trans Women, Native Americans, disabled women, men, children, and many others, can be centered in the evolving expression of this grassroots movement.”

This cultivated inclusiveness has lead to Guiding Vision and Definition of Principles that draws from the struggles of the Civil Rights era, and brings its evolution into the 21st Century. It is a great example of why “we need feminism”, because it can transcend barriers that are, in part, created by the power relationships within patriarchy.

Of course, for every Martin Luther King and Mahatma Gandhi, there has to be a Malcolm X and Subhas Chandra Bose to offer a counter-point. For the alternative vision to the Women’s March, check out #disruptj20.

As of noon, January 13, 2017, 187,000 people have confirmed they will attend the Women’s March on Washington on Facebook. If buses are any indication of interest level, the WMW protest will outdraw the inauguration itself by a factor of five. It seems safe to say that the attendence level will put it in the company of major marches.

Looking over the list of major marches, we could classify them into three categories: marginalized groups, anti-war and domestic policy issues. Most major marches are trying to address the problems of marginalized groups — such as blacks, LGBTQ, women and immigrants. Anti-war marches are next most frequent. Domestic policy would include marches on abortion, nuclear safety after Three Mile Island, labor union policies, etc.

Compared to these other marches, the Women’s March on Washington is unique. It is happening in a political reality where every marginalized group believes it is under attack and where there are limited means to combat it within the electoral framework. It is bringing many different marginalized groups together, and it is arguably the first truly intersectional mass protest march. The leaders of the march have the commonality of being women, but also, they have other identities that are inclusive across racial, sexual orientation, religious, legal status and other lines. In this way, the domestic policy agenda of each of these groups are integrated into the discussion — whether it is immigration policy, voting rights, minimum wage, police accountability, healthcare, equality for the LGBTQ community, religious freedom, and other issues. It is all of a piece. This is the how large grassroots movements are born.

The approach the WMW leaders are taking of inclusiveness that could serve as a core to coalesce progressive elements like Occupy Wall Street, Black Lives Matter, the sanctuary movement, and so forth into a larger movement. It would continue a pattern that could be seen in the Bernie Sanders campaign, but rather than the focus being on an individual, it has the promise of putting the focus on areas of agreement from within a coalition. If it get’s large enough, it has the potential to pull the more moderate elements of the Democratic Party, such as Third Way Democrats, Blue Dogs and others into its vortex.

The WMW is an opportunity and a promise pointing to the future. At this point, there is no opportunity to influence the legislative agenda of the U.S. Congress. But, it may give the leaders of the WMW the clout and the political capital to engage with members of the political establishment, and serve notice that even though one party is in control of the Oval Office and the Capital, there will be resistence. This election has been a wake up call for many people, and the slogan: “Don’t mourn, organize!” has never been more relevent.

While there is much that looks promising in the WMW march, there are limits to what it can do. One major issue is that a march on Washington D.C. is necessarily classist. An article in the Chicago Tribune illustrates the problem:

[Two female] Chicagoans… knew they wanted to attend the march almost as soon as they heard about it. But [one of the women], who says she lives paycheck to paycheck as a professional cook, had to cancel her bus ticket on Dec. 23 after the initial price of $120 ballooned to $160 as demand skyrocketed. Diaz, an artist who also works as a baker, thought she had a car ride with a friend until the friend’s work schedule made that impossible.

Some of this can be mitigated by local city protests, such as the Women’s March on Chicago. But, again, this highlights other limitations, such as the urban/rural divide that has been the source of much discussion since the election of Donald Trump.

And, of course, a Women’s March is, on the surface, exclusionary of men. There has been some discussion that men have been slow to support the march. But, this shows that there is a need to better communicate the larger goals of the march.

Every single action has limits. One march isn’t going to solve all our problems. Electoral politics is also limited in what it can address. Further, mass movements are, by definition, reductive. They can raise awareness. They can get the government to address the worst problems. But their real value is bringing people together to have conversations about the things they care about and looking for common ground with a spirit of empathy. It doesn’t mean you are a push over, but it does mean coming prepared to listen. And, it also means speaking up and demanding to be heard when the majority or some minority tries to implement their agenda without engaging different and opposing points of view.

The Women’s March on Washington D.C. is a start of a conversation that is desperately needed. It needs to start with remaking the Democratic Party into something different, something that reflects the values and points of view of the wider population. It needed to get beyond protesting Trump and the ideas he stands for, and it needs to turn into a discussion of what we, the people, stand for. This march is an important step in that direction.

P.S., The Guardian agrees and provides a fun point of comparison on how the same topic can be covered differently and make the same point.

Zuihitsu: On My Mind

"The tortoise is not merely a slow runner but an ugly one."